Well On My Way to HELL

One of my favorite things to do is start a statement with, "Not to be fucked up..." and then say, "BUT..." and follow it with somethin' really fucked up. I'm gonna do that right now, but before I start, I will say that I kno that tha statement I'm about to make is just one of tha things in a long list of reasons why I'll probably be placed in a cell next to tha furnace in Hell. But, in tha words of Eric Cartman, "WHUTEVA! WHUTEVA! I DO WHUT I WANT!"

...Okay, so my prayers go up to God for little Exodus Tyson and her entire family. However, when I first heard that Mike Tyson's 4 year old daughter had gotten her neck tangled in the cord to a treadmill in her mother's home and that she was on life support, honestly, my first thought was, "SOMEBODY HAD A BABY WITH MIKE TYSON??? WHUT THA HELL? WHY WOULD ANYBODY DO THAT?"

Come to find out, this maniac got like 6 kids. HUNH? Mike Tyson? Tha man that religiously beat tha shit outta Robin Givens? Tha man that was found guilty of rape and went to prison? Tha nigga that bit off a part of somebody's ear??? Whut woman in her right mind would even say good morning to this man, much less allow him to touch you...MUCH LESS allow him to (GASP!) put his penis in your body and impregnate you!?! Oh hell naw. These women need to make better life choices.

Tha death of a child is always horrific and deeply sadening. I can't imagine tha family's pain and once again, my prayers and thoughts are with this young mother. It is truly a tragedy. However, whut is equally as tragic, if not moreso is the cycle of abuse in so many of our lives, tha way in which Mike Tyson has lived and practiced violence and to see how destructive it has been to himself and those around him. I hope he's taking this time to reflect, is on his way to making some changes, and becoming a better man as a result.
Posted by Nikki Blak at 1:55 PM 2 comments:

Labels: Feeling Somekindaway, Get Your Life Together, Mike Tyson

Where Are Your Parents???

So, on tha heels of tha whole Sexy Spec gay grinding/twirling challenge, I came across another video that was infinitely more troubling.

I wanna start with tha most important question, which is: WHERE ARE THEIR PARENTS AT??? If there are any Moms, Dads, Aunts or Uncles reading this, let this be a lesson to you. Check up on yo daggone kids from time to time. Real talk. When they dissapear into tha basement or tha den with tha video camera, bust in on they asses every so often. They could be barricaded in that room doing ANYTHING, as you can clearly see here.

Second...we need to talk openly about sexuality. Do any of these young men think its just a tad bit gay to be humping tha walls, floors, ottoman, and/or air with a trashy slow jam playing in tha background while in tha company of 5 of your best male friends? Is this considered normal behavior amongst heterosexual boys? Or are they confused? I mean...if they're gay, then they just are, and I suppose that's fine. For some reason, though, I feel like if they were called "Gay" or if someone inquired about their sexuality, they would be mad offended and quick to defend their "manhood". So, then, is this how heterosexual young men act? Honestly, I feel like this behavior is symbolic of some repressed sexuality. I could be wrong, but then again, this whole thing is wrong, so...hey.

Third...I think a lot of this is a result of group mentality. Like all of us, these young men have absorbed a lot of tha images and messages from tha media and really right now they're probably just re-enacting some of whut they've seen. There are a lot of flamboyant men skipping about nowadays, getting alot of media attention or just creating their own buzz via Youtube and whut not. Nowadays, tha more deviant, tha better. Aside from being black in America (which obviously, everyone can't achieve) tha most deviant thing you can probably be is homosexual. I think on a subconscious level, young folks in particular are leaning toward flamboyant "homosexual" behavior and exploiting it to get attention, or "be different". Whutever tha case, if this is tha future of Black Manhood, tha Lord just need to go on and take me now.

In closing...I would like to recommend rigorous ass whoopins and gut punches for everybody involved in tha making of this video, as I am forever scarred.
Posted by Nikki Blak at 9:46 PM 6 comments:

Labels: DON'T DO IT LIKE THAT, Keeping it Real, Pretty Ricky, Take Me Now Lord

I know, I know, I KNOW! I fell off...again. I'm sorry! I been busy! I'll reserve all tha details about whut happened with my poem a day and whut tha hell I been doin', while I was missing in action for basically all of tha month of May for another blog post. None of that is important now. There are two WAY more pressing issues. 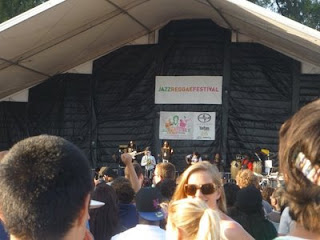 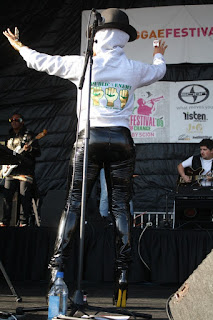 I was there. Yes, she did wear a hoodie with a hat on top. Yes, there was a black, satin sleeping cap under tha hoodie. Yes, she poured out a little liquor for tha homies that ain't with us. Yes, she did whut tha fuck she wanted, too.

I DEFY YOU to look at this video for any length of time and tell me that this isn't at least one of tha top 5 gayest things you've ever seen with your own eyes. Tha only way this could become slightly more homo is if his clone came out and started dancing with him. And then if they had sex. This, folks, is tha reason why I blog.

Oh, and before I go...lemme go on ahead and give him tha Nigga Please Award. I'm pretty sure he deserves it.
Posted by Nikki Blak at 12:50 AM 2 comments:

Labels: DON'T DO IT LIKE THAT, Erykah Badu, Fashion, Funny to Me, Get Your Life Together, Nigga Please Award, Pretty Ricky, UCLA Jazz Festival, Where I Be
Newer Posts Older Posts Home
Subscribe to: Posts (Atom)