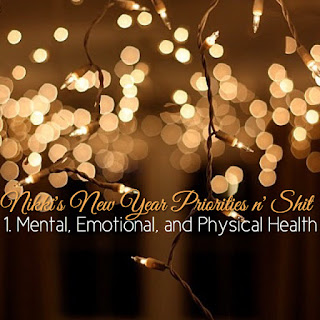 This is something that I don't ever really think about. It is because I consider myself to be very mentally and emotionally healthy, and I'm pretty confident in my physical health as well. I look pretty good and for the most part, I feel good. Of course, we all have our days when the world is heavy, or we're still carrying that grief from that loss, or there's some anxiety or manifestations of stress, for whatever reason.

I'm a person, not a machine. I'm dealing with things and experiencing a full range of emotion, just like everyone else. That may seem like a statement that merits a "no shit, Sherlock" response, but I think it's important to make that clear. Because, I've created a reputation for myself amongst people that know me well or may not really know much about me at all, that I am, for lack of a better word, a machine. I typically don't show a lot of emotion. For the most part, my shit is always together. I appear to have everything under control and seem unfazed by shenanigans and bullshit. The emotions that I do express are very controlled, never out of hand or volatile. I'm somewhat predictable in that way. Logic rules me. I'm stoic. I inherited that from my Virgo mama and manifest the traits of a Virgo moon. However, I am a person, not a machine.

I remember one time I expressed that my feelings were hurt about something a friend did and their response was, "You're being dramatic." Trust, there was nothing dramatic about how I communicated my disappointment... I simply said, in a very calm and sort of matter of fact way, "Hey, that hurt my feelings." But I realized that, because I, for once, revealed that I have actual feelings, it was a dramatic production. Why? Because, I'd never done that before. It was somewhat out of character. It was "much" and "extra". Had I been someone else, who had had a history of "feels", they wouldn't have batted an eye. That was my doing. I had masked my human-ness with my machine-like nature.

Well, here I am. I feel things, it's true. Everybody, get over it.

I'm actually an empath and I've always been. I can literally, physically feel people's emotions or changes in mood. And I think about others -- like, "How would this make them feel?". I care about people's feelings.

Sometimes I allow my logic to cancel out my own feelings. Actually, most of the time. And then, there are times when my thoughts actually allow me to feel more deeply, especially when it involves another person's pain. I have been overcome with grief, just thinking about someone else -- a complete stranger -- losing someone they love.

The news makes me cry real tears. Racism, sexism, xenophobia, transphobia, and homophobia have physically and emotionally worn me the fuck out. Police brutality and "post racial America" have recast me into a pendulum that swings back and forth between depression and blind rage. I sat at my desk at work, pregnant with Rosie, and cried listening to the George Zimmerman trial. The comments section of online news articles makes me feel homicidal. I'm pretty sure I'm suffering from PTSD.

Sometimes I have to step away from this shit. We all do. But it's hard not to want to expend every drop of energy trying to correct this societal madness. And yet, even if we did wear ourselves down to our bones, our individual efforts alone would not suffice. We have to take turns digging a tunnel out of this prison. You rest while I dig, you dig while I rest, we all take turns and we'll see freedom.

There is this thing called "self care". I don't think I'm so good at it. I work 2 jobs and go to school. I'm typing this at 1:25 am when Lord knows I'm weary. But when else will I get this done? There's literally no time. I have no time for a single thing, much less myself. And when I get too tired, my body gives out.

Somewhere in this year, I need to get a handle on allowing all of the things that I have to do and the beanstalk of a list of things that I want to do that just goes up, up, up into the sky, to come secondary to my overall health. Toxic folk, toxic news, toxic situations, must all be dealt with only when I'm fortified enough to do so and not before. I'm saying, "No," more often than ever, so that's a good first step. I'm being honest about my feelings, even if it makes people uncomfortable, or if it isn't pleasant or if it makes things inconvenient. That's just the hard truth. It is not my intention to hurt or slight anyone. It's just that, I've been entrusted with taking care of me and I think it's important that I do a decent job of it.

So, there's that. Out the gate in a brand new year, my first priority is to put my mental, emotional, and physical health first. I think that if I do that, everything else will fall into place.

Posted by Nikki Blak at 1:37 AM No comments: 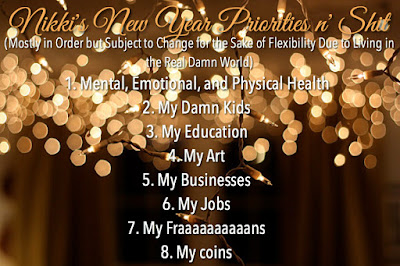 Merry Joyous 2016 and Ho-Ho-Hotep to you. You made it. Ain't that got the nerve to be something? Seriously, plenty of people didn't step foot into this year, so merely staying alive may not seem like an accomplishment, but depending on your circumstances, it may very well be. I think 2015 tried it's damned-est to take a lot of us out! I am relieved to have escaped. I've been excited for 2016 for a while, now.

I typically don't "make resolutions". Them things don't work. And why wait until the new year? Just wake up everyday and decide that you're gonna do some shit and do it good. That's what I try to do. I mean, I also fail miserably everyday at something(s), but it's all good. Tomorrow's another day. However,  this year does appear to have some sort of freshness seal on it, so I decided to bust that thing wide open by reflecting on my previous year(s), asking myself what I really want, what's the most important, and being very intentional about prioritizing.

This led me to my lil' priority list. And contrary to what I say in my extremely misleading title, these priorities aren't really "new". They've always been there. I guess I'm just putting a name to some areas of my life and being very specific about the categories that consume most of my mind, heart, and energy. I'm sharing this with you all because I'm serious about it and I typically don't just yammer on about things I haven't already committed to. By putting it out there, I'm sort of putting myself on blast so that if I fall short, you all can give me a good, strong side-eye. And I don't want any side-eye. So, I have to do this. Hold me accountable, folks.

This year, the following 8 things are my focus and I will prioritize them, mostly in this order:

Over the next 8 weeks or so, I will address each of these priorities here, as a way to assess my intentions, reflect, and gain clarity, for my own damn self. Of course, I would love for you to read and comment. Hey, what are your goals and priorities for 2016?
Posted by Nikki Blak at 1:46 PM No comments: