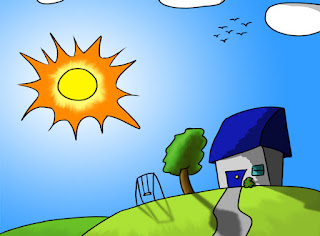 As you may recall, my former landlord is an incompetent jerk. You remember that time he acted a fool when my rent check got lost in the mail and that other time when I gave him 30 days written and verbal notice that I was vacating my apartment (per the terms of my month to month lease and in compliance with California state law) and he acted like he had a problem with that? This is the man that often took forever to make repairs, dragged his feet about scheduling time to do a final walk through of my apartment once I'd moved out, and finally, showed up 45 minutes after the mutually agreed upon time. Well, it's been over six months since I moved out, and (SURPRISE!) this fool hasn't returned my security deposit to me.

According to California state law, a landlord must return a tenant's security deposit in full within 21 days of the last day of occupancy. Typically, that 21 day countdown starts on the day of the final walk through. If the landlord is withholding any part of the security deposit, he or she must notify the former tenant in writing with an itemized list of deductions. So, if you kicked a hole in the wall or stole a light fixture, your landlord would have to send you something that basically says, "I'm deducting such and such amount for the repair of the thingamajig." In my case, the apartment was in excellent condition and thoroughly cleaned. Of course it showed of a reasonable amount of wear and tear which is understandable with 3 years of occupancy. However it didn't need much done to it in preparation for the next tenant. Perhaps a coat of paint.

I had paid my final rent, trusting that despite his shoddy track record, he would do the right thing and pay what he owed in a reasonable amount of time. But, as R. Kelly so eloquently stated, "Haters gon' hate. Ballers gon' ball," and true to his character, my landlord did not do the correct and proper thing. I wrote him a nice email, as a reminder that he owed me some good money. No response. This is the point at which I started calling him. And of course, he participated in shade and didn't answer his phone. He didn't respond to my messages. He was a sucka emcee. But I really want to call him something else. But I won't, 'cause my Mama raised me right.

One day, my fiance called him and cursed him out. I think he did it in Spanish. My landlord called me, damn near crying (like a little bi-- Oh... I said I wouldn't call him somethin' else. Nevermind). He was a fountain of excuses. He was offended that I would take such measures and almost went as far as to say that my fiance doesn't know his life. I told him, "Listen. That's the man I'm marrying and currently residing under the same roof with. It is absolutely his business. He doesn't have to know your life. You owe me. So, you owe us. Cough up the dinero, compadre." And then he started with the promises to pay. "Just give me some time," he said. That was back in June.

Really, ain't nobody got time for that. But, I have to do what I have to do, mostly out of principal. I've been living without that money for a long time and [thankfully] I hadn't hinged any dreams on it or made any plans for it. That money would be extra. But the point is that its MINES. Not his. So, now I gotta take attention away from things that I want to do to go deal with some foolishness that I shouldn't have to. Such is life.

Here's the thing though. I have a theory as to why he "hasn't been able" to return my security deposit to me. Remember that one time last summer when Ashley Catharine McGinty (also known as "That Girl") came to stay in my spare bedroom and proceeded to make messes and not clean up after herself, try not to pay rent, and finally not return my house key to me once she left? Well, about a week after I had moved out of that apartment, I stopped by the premises to check and see if there were any random pieces of mail for me that may have been mis-delivered to the old address... And I saw that someone had already taken up residence in my old apartment. Hmmm.

This struck me as strange since, as far as I knew, my old landlord had not advertised the apartment as vacant and it was still the middle of the month. Surely, at that point, he hadn't had any time to prep the apartment for a new tenant. For someone to be occupying the place within a week was just...

Hey. I suspect that That Girl (who, as far as we know, still has my keys), let herself into the vacant apartment  once the coast was clear and took up residence. Listen. Stranger things have happened. And with a squatter in the unit [and California laws regarding tenancy being what they are] there would be no way to swiftly order an eviction, physically remove the unwanted occupant, and rent it out to a new tenant. Therefore there would be no way to obtain a new security deposit or collect any rent... And maybe no way to return my deposit to me. With his broke behind. I'm just sayin'.

As you can see [and probably already knew], my life is full of the finest foolery. Now, excuse me while I go write a check to Southern California Edison in the amount of $.57. Good day.
Posted by Nikki Blak at 7:34 AM No comments:

100 Thousand Poets for Change at A Mic and Dim Lights 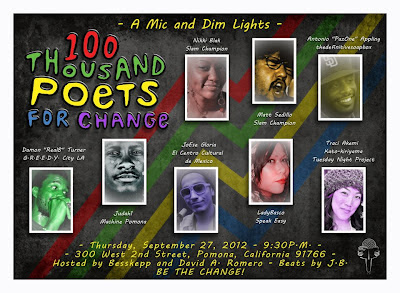 This Thursday, September 27th at A Mic and Dim Lights in Pomona, I will be performing along with a small but deadly gang of talented poets in 100 Thousand Poets for Change. It's a special night of poetry organized by David A. Romero in conjunction with the grassroots educational organization, 100 Thousand Poets for Change. The organization was originally conceived by Michael Rothenberg and Terri Carrion, as a worldwide set of events to take place either simultaneously or at different points throughout the year. Future plans for the organization involve raising funds to help poetry, music and other arts organizations world-wide organize peace and sustainability events.

The evening promises to be inspirational and memorable, thanks in part to an opening feature set from Mic and Dim Lights founder and host BessKepp and music provided by in house DJ, JB. I'm excited to be a part of this event and stand in solidarity with a diverse group of poets around the world, gathered to promote serious social, environmental, and political change. I hope you'll join us.

Posted by Nikki Blak at 6:00 AM No comments:

The Cost of Stupidity

I got this out of my mailbox the other day: 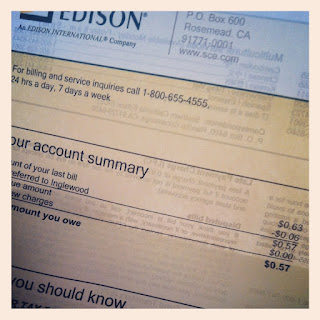 Let's talk about this. First of all, I haven't been a customer of Southern California Edison in over 6 months. In March, I moved to a part of Los Angeles that they don't provide power to and therefore had to discontinue my service with them and take up with the Department of Water and Power (who I hate, for good reasons that I don't have the energy to get into). Southern California Edison sent me my final bill, probably in April. I paid it. We're done. Sooooo... what the hell is this?

Second: I don't even have an account with them. It was closed in April. So, again I ask... What the hell is this? Third: Even if I still had an account with them, in the span of six months how would I manage to only owe them .$57? FIFTY SEVEN CENTS. And that is the total that they arrived at after a $.06 discount. Wait a minute. This is a joke, right?

So, wait. Not only do I mysteriously owe them the absurdly minuscule amount of $.57 on an account that hasn't been active for half a year, but they were generous enough to apply a discount to an amount that was so important that they had to generate a bill, utilize good paper and ink, and apply postage so as to collect these funds.

This reminds me of the time a few months ago when AT&T was sending me bills in the amount of $0.00 for months after I had canceled my internet service. These utility providers are like pushy ex-boyfriends who can't accept that you don't want anything they have to offer anymore. I don't have any energy for harassment from companies in the form of false bills, unnecessary paperwork, and junk mail. Please, go die in a fire.

The most ridiculous part of this entire scenario is that it probably cost Southern California Edison more than $.57 to send me this stupid bill. My plan is to call them up and do a dollars worth of cussin'.

Posted by Nikki Blak at 7:29 AM No comments:

Labels: ATT, Baby Bye, DON'T DO IT LIKE THAT, In Real Life, random acts of foolishness, Southern California Edison 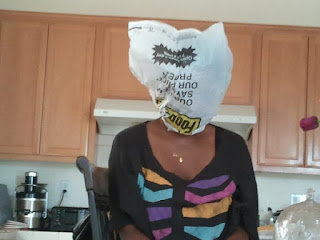 Remember when I called myself participating in the "Blog a Day" challenge back in August? Well, forget all about that. [insert sigh here] Listen people, you're gonna have to cut me some slack. I'm getting married in a matter of days and I have no dress, my child done turned 13 and is tryin' to get grown all in my face, my computer has an attitude problem, I ain't got no job and have been going on interviews were I have to wait for 45 minutes! Life is hard! I have waist length yarn braids and a household to maintain. And apparently, according to Southern California Edison, I owe them $.57, though I haven't been a customer of theirs in about 6 months. Admittedly, blogging isn't always at the top of my list of things to do. But thankfully, everyday is a new day.

I actually have a couple of things that I've been working on that I will share with you all in the coming weeks and months. Also, in addition to prepping for a lifetime of commitment to my soon to be husband, I'm getting ready to compete in a slam that will take place 6 days after we're married. Who agrees to cut their honeymoon short to go compete in a slam? *points to self* Clearly, I'm out of my mind. And you know that I haven't seriously competed in a slam since 2007, so I have no idea what I'm actually doing, or what came over me. Is this a mid-life crisis? I need answers.

Anyway, as the year's end approaches, there are some exciting things taking place, and I'm not just talking about my own life. I was telling a friend the other day that I really get the feeling that 2013 is gonna be poppin'. "Gonna be poppin'"... That's probably not an acceptable term in the literary world. But, whatever. That's what it's going to be. Poppin'. Tell ya mama, tell ya daddy. The elections are goin' down, folks are getting married left and right, people are starting businesses, being creative on never before seen levels, and making major moves. It's pretty inspirational. I'm trying to be a part of that particular movement. So thank you for your continued readership (or if you have no idea who I am or how you ended up at this blog, thanks for wandering on over), and thank you in advance for partaking in the ramblings, observations, a foolishness to come.