This morning, I watched what I believe to be a neighbor's cat bat a little mouse around my driveway for a strong 30 minutes. The cat, who is a rascal (I've witnessed him pooping in my yard and I've caught him running away from a session of destroying some backyard plants) literally held this poor little mouse hostage. He tossed him up in the air, sat on him, laid on him, stood on him, bit him, and somehow, this mouse was still alive. The mouse would lie motionless for a while and when he likely thought it was his chance to escape, would try to scurry away, only to be pounced on, trampled, and tortured again.

I felt so bad watching it, I almost wanted to go out there and scare the cat away. But then, I figured, it was unlikely the mouse hadn't already sustained life threatening injuries. Plus, it was a mouse... I mean, really, Nikki. So, instead, I just hoped the cat would be merciful and just go ahead and eat the mouse and let it be over with. Because, obviously, the mouse was not going to get out of this alive.
The cat ended up moving the torture session to another part of my driveway that I couldn't see as well and eventually went over to the next door neighbor's lawn, and out of my sight. I think I may have seen him put the mouse in his mouth for a final time and not spit him back out. I'm not entirely sure. I got distracted and had to get on with the rest of my morning.

I thought about the significance of viewing this spectacle on Valentine's Day. I think it pretty much sums up everything quite nicely.
So, yeah.

Hey, so I'm gonna go ahead and release a new chapbook mid March. It's called "All My Exes Want Me Back" and it's about exactly who and what you think it's about. If you'd like to be the proud owner of a copy BEFORE the actual release date (which, by the way, is March 14th), then you can get your preorder on. 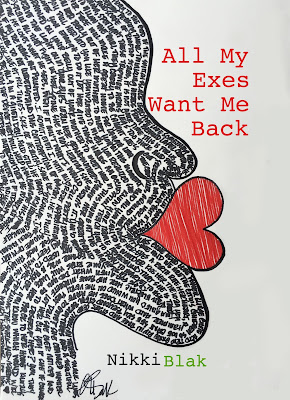 Preorder your copy of "All My Exes Want Me Back" at Blakisbeautiful.com.

Posted by Nikki Blak at 4:46 PM No comments: