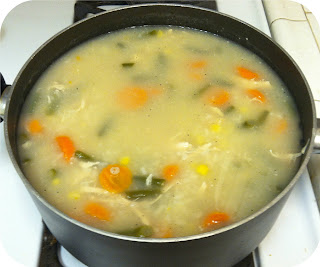 The fact that I haven't blogged since October is just... Look, let's not talk about that. I've been off somewhere getting married, so I need for ya'll to give me a pass. Okay? Okay.


So, now that the man formerly known as my fiance, formerly formerly known as my boyfriend, formerly formerly formerly known as a stranger with a guitar, has wifed me up, he expects to eat everyday. And supposedly, I'm expected to do at least some of the cooking. He's got a lot of nerve, but I love him, so I've been trying to see what I can do. And since it's been bone shattering cold here in Los Angeles, I got it in my head to make soup. SOUP! It's brilliant. You just throw stuff in a pot with broth and seasonings and eat for days and days. It hardly requires any effort, but the person consuming the soup feels nourished, nurtured, fortified, and cared for.


I decided I'm going to make a soup a week. The interner-webs are overrun with soup recipes, so this will not be hard. When I announced on Facebook that "A Soup a Week" was going down, a friend of mine requested pictures. I can do you one better and give you a whole blog. Boom.


So here's the first one. I've named it "My 20 Minute Chicken Rice and Veggie Soup", since it should only take about 20 minutes (maybe 30, at the most) to make because everything is pre-prepped. Here's what I used.

The magic of soup is that you can sort of just throw whatever you have around into the pot. You may choose to use fresh veggies, but I didn't want to have to chop and prep them. Also, I rarely buy fresh produce anyway, because I always want to flip a table when my investment starts to go bad before I get to eat it all. I don't know about you, but as for me and my household, we don't have money for that sort of foolishness. So, frozen veggies it is. Throw them in the pot. My pre-cooked rotisserie chicken was $7 and was already seasoned and ready to go. You can easily pay more than that for a pack of chicken breasts that you're gonna have to clean, prep, and cook, so why not save yourself the effort and time? I pulled the meat off of the bones and threw it in the pot with the veggies, rice, broth, and water over a medium fire. I added my 4 tablespoons of crushed garlic and a random amount of sea salt, pepper, and onion powder.

In about 20 minutes, we had a huge, steaming pot of "homemade" chicken soup. It was so good!
Posted by Nikki Blak at 10:38 PM 2 comments: