When Black Women Cut All Their Hair Off...

About a week after I first cut all my hair off (for tha billionth time in my life) I had an interesting little exchange with tha mail man at my job. He's a really cool, older black man named Jimmy who has a bit of a southern accent, regularly talks about his wife, and chats with us about sports. He's a father type, who probably goes to church on Sundays and knos a little somethin about cars. No nonsense, real decent kinda guy. He came into my office as part of his daily routine, placed our mail on a table, sat our packages beside tha mail, and as he was collecting our out going parcels looked at me and asked, "Are you sick?"

Of course, I was confused.

Then he went on to say something to tha effect of, "Well, I saw all your hair was gone and didn't kno if you were sick..."

Which led me to a thought...

In tha Black Woman's quest to find beauty in herself, she's been led down a path that dictates that she must grow and keep as much hair on her head as she possibly can at all times. I kno this, partially because I am a Black woman and also, because at one point I was a hairstylist. Not only would a good number of black women fall out and die at tha mere thought of cutting off their hair, but most won't consider tha possibility that they might be able to function in life should their hair decide to wave, curl, or (GASP!) nap up. For tha average Black woman in America, there is simply no fate worse than bald or nappy headed-ness.

Which leads me to a fundamental truth about Black Women...

If she has cut all her hair off, she is probably (A) DYING OF CANCER, or (B) HAS COMPLETELY LOST HER MIND.

Well, I ain't dying of Cancer, praise White Jesus. So, tha latter must be true. I mean, why else would anyone do this... 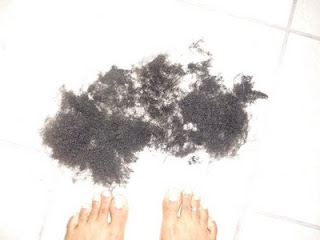 And intentionally go from this... 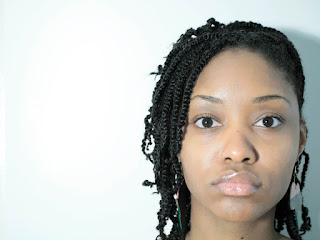 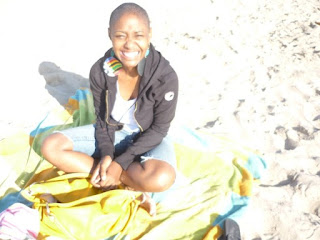 Observe tha slightly crazy look that was already present in my eyes before I went off tha deep end and took some clippers to my scalp. Notice tha crazed grin in tha "after" photo. Clearly, something is wrong. And whut's worse is that apparently, tha insanity is contagious. My best sista-friend from high school went from this... 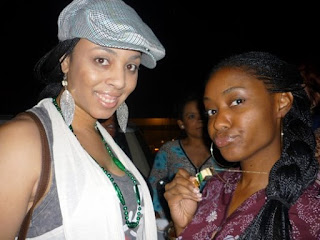 Menacing! And whut exactly is it that she's got hiding behind that door back there? Answer: You wouldn't wanna kno!

And this po sista... 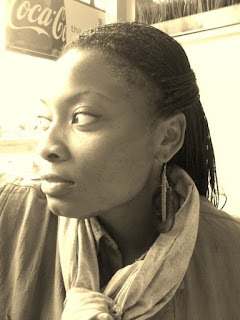 Well, she been a stark raving mad lunatic, but doesn't tha lack of hair make it more apparent?

I certainly think so.

Okay, yes. My point is whut reactions to Solange's recent chop confirmed. As a Black Woman, you can't do any of tha following things:

*Love yourself
*Think you're beautiful
*Refuse to hav said beauty defined by society
*Not want to be boxed in
*Feel tha wind and/or sun on your scalp
*Go swimming and put your head UNDER tha water
*Be satisfied with tha way God made you
*Not be terrified by naps
*Not think that your hair is your beauty
*Not want to put harmful chemicals in your hair
*Want to look Afrikan
*Not be concerned with whut a man might think
*Look in tha mirror and not think you're ugly
*Not compare yourself to others
*Want to look and feel like yourself
*Not sit in a salon for 6 hours every two weeks
*Not strive to be perceived as "beautiful" by Eurocentric standards
*Be satisfied
*Feel like you're enough, as you are

And you most certainly, must not, under any circumstances allow your hair to be nappy. God forbid you cut it off.

Remember it. Own it. Embody it. Live it. Teach it to your daughters and preach it to your sons. It's tha only way to quell tha hideous scourge of crazy bald headed black women that hav come to invade your consciousness. They may not hav Cancer, but they are a type of insidious, parasitic disease, feasting upon all that is good, acceptable, and decent. Shifting your paradigm, fuckin' with your perception of beauty, broadening your horizons, trapping you in their webs of nappiness, blinding you with tha glare of tha sun reflecting off their shiney scalps. They'll make you crazy, too, if you're not careful... So be careful.

Mothers, don't let your daughters grow up to own clippers. All that great hair that you so lovingly permed and pressed will be gone in an instant. And then, whut will become of her? She might end up somewhere... thinkin. She might hav tha nerve to hav a little bit of pride (ugh!). PRIDE DON'T PAY THA BILLS!

[laughter. Lots of it]

Forreal, tho... all jokes aside... this is not a judgement on Black women who chose to grow their hair long or straighten it (tho, I do feel some kinda major way about that, but I won't talk about it, cause I don't want to hurt nobody's feelings... today). I just want to encourage all women to be brave, and bold, make tha best decisions that you can for yourself and love you, no matter whut people like, don't like, or may hav to say. God made you, and that is enough to make you beautiful.