It was tha leg kicks that did it for me...

I'll admit, I am at times very immature. As a result, I'm still chuckling my ass off about tha whole Taylor Swift and Kanye fiasco, and needless to say entertained by all things relating to it. Tha shit is silly. Tha actual act of getting out of your seat to interrupt some one's speech and give your unwanted, un-asked for opinion, tha fact that it overshadowed so many much more important news stories, that it eclipsed tha original reason for Kanye being on Jay Leno's show to begin with, and that (white)folks are complaining now that Kanye is obviously, apparently racist -- wait -- because Kanye acted an ass, he's racist? Hold on. Let's explore this.

Now, I can't really tell you whut possessed him to hop his ass up out his seat and help himself to tha microphone in tha middle of Taylor's acceptance speech, but I can tell you this much -- Kanye ain't stupid. Bully? Yes. Coked up? Likely. Bitch? Quite possibly. Racist? No. Lemme tell you how I came to that conclusion... (aside from Taylor and Beyonce) Tha following ladies were nominated for that award.

I got a toothache just lookin' at her daggone picture. Based on visuals alone, do you get where I'm goin with this? You're smart, so of course you do. However, I'mma just go on ahead and say it for tha slow kids in tha class:

Kanye would have never in a million years gone up on stage and interrupted anybody but Taylor's speech! EVER!

'Cause he ain't stupid.

You and I kno that if he had been able to get tha nerve up to even get up out his seat and act like he wanted to show out while they were accepting their awards, Kelly Clarkson and Katy Perry would've had NO PARTS of that, Lady Gaga with her crazy ass woulda been liable to do a Mike Tyson on that brutha, and Pink -- OH, HONEY... Pink might've put her cigarette out on his forehead, raped, and shanked him.

Notice, all of these women are white. I guarantee you, race wasn't tha motivation behind this outburst. If anything, it was simply an opportunity for Kanye to talk. You kno that boy likes to just talk. Don't believe me? Just listen to tha last track on tha College Dropout album. He talks for 8 minutes and 45 seconds, damn near without taking any breaths.

So, now that we've got that out of tha way, let me get to tha part about this whole thing that disturbs me (and tha point of this whole blog). I read around tha web that after tha incident at tha VMAs, some folks up and lost they damn minds and started name callin'.

Joeben Buena tweeted, "So I just heard. Kanye West had a nigger moment last night at the VMAs." Jake Snider tweeted, "...Thank you Kanye for proving what I've been telling people forever. You're a nigger!"

Forreal? With tha strong "ER"?!?! We doin' it like that? Oh, okay. I shouldn't have to tell you that neither of these muthafuckas are black, nor is this beezie Kayla Larson from California's Bay Area, who tweeted, "Kanye West is a fucking NIGGER! It's guys like him that make you all look bad!"

Sorry, Kayla-boo... it's actually bitches like you who make "you all" look bad. Granted, none of these things would hav been uttered by any of tha above mentioned backward-ass, possibly inbred folk in an environment that didn't provide a level of anonymity and a great physical barrier. I would pay good money to see Jake and Joeben down at tha Baldwin Hills Crenshaw Plaza talkin' that much shit, or little Miss Larson in a room full black girls with that much to say. It would indeed be a tragedy. And yes, I believe in and advocate putting your hands on folks that obviously don't understand anything other than a good choking out.

Sidebar: We have told non-black folks for far too long that "nigga" (or any variation of tha word) is not a part of their vocabulary... and yet, they persist. Whut is one to do when reasoning and polite talk has failed? I think it's time to get Wayne Brady involved.

Of course Kanye is partially responsible for some of this. Though he doesn't deserve to be called all out his name or have racial slurs and insults hurled at him, he had to have known that it might go in this direction. After all, this is whut happens when you don't learn to leave white women alone. Whether you're whistling at them, tryin to wife them, or in this case, wrestle a microphone out their hands so you can sing Beyonce's praises, white folk aren't going to just allow you to mistreat their precious vessels of life. Black man, you better appreciate that white woman -- while averting yo negro eyes. And speak soft, too. And call her, "Ma'am". And shuffle yo feet.

Interestingly enough, I didn't hear all this nigger talk when Chris Brown battered Rhianna. So basically, a black bitch can get her face busted open at tha hands of a black man and it's business as usual, but if he interrupts a precious white woman's little acceptance speech, it's lynchin' time. I see. Well, thank you America for telling me whut I already knew: Tha issue of race in America is similar to a smoldering fire -- though it may hav appeared to burn itself out and subside, it is still hot and ready to be rekindled, ignite, rage, and continue its path of destruction, if only given tha opportunity. Don't let this black pawn -- I mean, President fool you. Racism is still very much alive.
Posted by Nikki Blak at 6:23 PM 3 comments:

Is it just me, or is crashing somebody's performance slightly more unforgivable than interrupting their acceptance speech? I'm just sayin.

Well, I just wanna go on record saying that both Random Acts of Foolishness blessed my soul in ways that I cannot express. Thank you, Lil' Mama and Kanye for helping me hav tha best week ever. 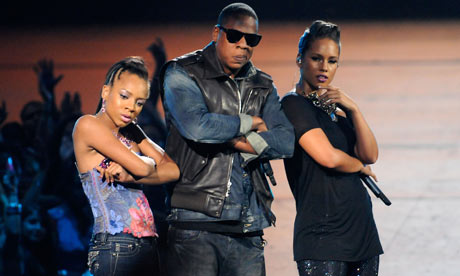